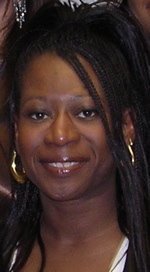 After a successful venture in self-publishing, Cherlyn Michaels received a two-book publishing deal for her debut novel, Counting Raindrops Through a Stained Glass Window (2005).

Cherlyn’s first writing experiences were in elementary school after a teacher introduced her to the works of Langston Hughes. Afterwards, she playfully developed her first character, Marzina the Martian, and acted out scenes on the playground with her best friend. With another friend, she co-wrote, produced and starred in her first play, “The Black Cinderella,”--a comedic version of the Disney fairy tale. Continuing to write sporadically over the years, she accumulated a small treasure of short stories and poems.

After graduating with a bachelor’s degree in Chemical Engineering, Cherlyn began her career in corporate America and returned to school to attain an MBA degree. But with one year of graduate studies underway, she decided to put her education on hold to pursue her dream of writing and publishing her first novel.

Cherlyn began by first studying the writing craft, attending conferences and taking writing courses. She participated in various writing workshops including the Voices of Our Nations Arts Master's Workshop (2003) and the UCLA Extension Writers Studio (2004 & 2006). In these workshops, she practiced under the guidance of several renowned writers including Leslie Lehr, Tod Goldberg and Terry McMillan.

To kick off her writing career, Cherlyn drafted nine story lines and chose to workshop and begin her writing career with one of them: Counting Raindrops Through a Stained Glass Window. In 2003, she was named the Shades of Romance Magazine Best New Multicultural Author of the Year and nominated for the African American Literary Awards Show Open Book Award for Best Self-Published Author of the Year.

In Atlanta, GA, Cherlyn works as a technical writer, ghostwriter and voice talent as she works on her next novels.